From Outrank, an NYC-based digital product studio and product consultancy.

From zero to 30k downloads in 2 weeks: How we started Hacker Daily

Just over two weeks ago, I wasn't a podcaster.

Since then, my cofounder Harish and I have released 12 episodes of our new podcast, Hacker Daily, which has been downloaded over 32,000 times.

Honestly, neither of us expected this to happen.

This was just an experiment that came out of a brainstorm. Like a lot of founders, I've got a huge list of ideas, appropriately titled “Dumb ideas.” It includes list of things to research, like voice apps, tools to curb digital addictions, and podcasts. I was exploring a few of these simultaneously, but once I started digging into how podcasting actually works, I was hooked—I started listening to more and more podcasts and trying to figure out how the ecosystem works.

One thing that jumped out at me during my research was the recent popularity of daily shows. It totally makes sense—people are replacing listening to AM/FM radio in the car with podcasts and streaming music. Services like Spotify and Netflix have changed expectations: we want control of what we see and hear. And given that we commute every day, releasing new content daily could build a habit.

The trend is especially interesting because podcasts have been around for a long time—but somehow, daily shows hadn't taken off until relatively recently. The New York Times' “The Daily” is the canonical example, but others like Vox, the BBC, and NPR are starting daily podcasts as well.

To me, the success of The Daily demonstrated a clear demand for new episodes much more frequently than the weekly or monthly updates of other podcasts. As an engineer, my instinct was to build a podcasting tool, but then I thought: why not just start a daily podcast? And the obvious followup: What could we talk about on a podcast every day?

I decided to look at existing audiences that might be served by a podcast, and Hacker News immediately came to mind. We've both been readers since 2007, and because I've gotten some “meta-HN” blog posts onto the HN front page before, I know that Hacker News devours content about Hacker News.

Thus an experiment was born: What if we summarized the top stories from HN every day on our podcast? We'd have plenty of interesting stuff to talk about every day, and we could include comments from the site alongside our own summaries and and analysis.

As quickly as I could, I bought a domain name (http://hackerdaily.co/), whipped together a landing page and a mailing list form, and submitted to HN... and nothing happened. I felt deflated.

I had essentially given up on the thread, so I left to meet a friend for coffee. But when I got back, I was surprised to see over 100 email subscriptions! Despite a delay between when the story got some upvotes and its appearance on the front page, our experiment yielded what we were hoping for: real interest in Hacker Daily.

Given that enthusiasm, we decided to stop coding and start recording a podcast.

It turns out doing a podcast from scratch is a lot of work. Over the next few days, we got some equipment and started messing around with potential formats. I tried recording at home and at my shared workspace; I settled on recording in the supply closet before my coworkers arrive in the morning. Harish was recording in his closet after his kids went to sleep, and eventually set up a mic in his living room. Truly a professional operation. 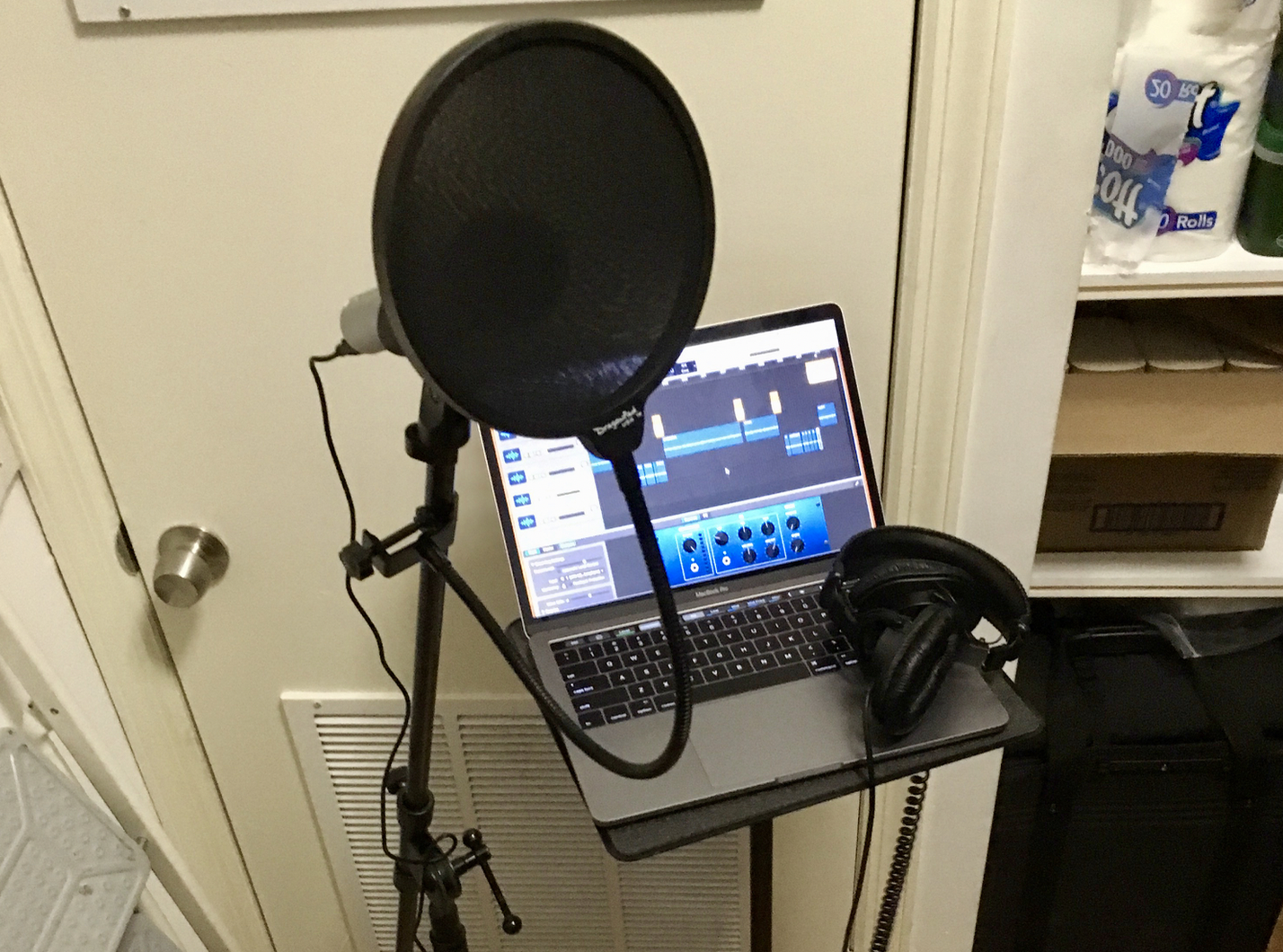 My super-pro recording setup in the supply closet

Once we could record our voices reasonably well, we had to get an episode together—which meant lots of decisions. We had to choose a length, and a format, find some theme music, and figure out how to transition between stories. I used GarageBand for recording and editing because it's easy enough, and free—and I recycled some music from a past life when I sang in a dance-punk band in San Francisco. Though there was a bit of a learning curve, things came together surprisingly quickly.

We recorded our first real show on Monday April 16th, just six days after our original post. We cut everything together as fast as possible, and submitted to Hacker News at around 11:30am Eastern time. I was nervously refreshing the /new page, waiting to see if the story would take off.

Just like our first post, it took a couple hours until we finally appeared on the front page. The response was greater than either of us anticipated.

Stats from our official launch on Hacker News

We ended up getting 199 upvotes and staying on the front page for over 12 hours. That day, according to our podcast host, we got 1,946 downloads of our new podcast. Surprise: people were listening!

Since then, we've released a new episode every weekday and amassed over 30,000 downloads. Our top episode from this past Friday has over 3,200 downloads—that's way more than we expected to have 2 weeks into this experiment. And our audience is still growing.

I've called the show a “minimum viable podcast,” and it really does feel that way. Though we've gotten our sound quality to a reasonable point, we're still working on a host of issues, like figuring out what kinds of content work best, and how much original commentary to add.

We'll write more about how we actually record the show, and dig into our stats in more detail in the future. For now, make sure to subscribe to Hacker Daily, sign up for our mailing list, and review us on your podcast app. And if you're a podcaster, sign up for the beta of Podswap to get more listeners for free.

Thanks for reading. We'd love to hear your feedback!

Participate in the discussion on Hacker News